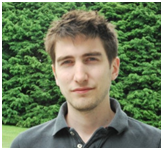 Matt is an avid Dedoose user, championing our qualitative data analysis and mixed methods software via social media where we commonly find him tweeting about his use of Dedoose. Matt is a Sociology PhD student at University of California, Irvine and a researcher for the Connected Learning Research Network based out of the University of California Humanities Research Institute. We find his research, particularly the work regarding dating preferences among gays and lesbians outlined below, to be absolutely fascinating, and we are excited to call him a user!

Matt began his program at University of California, Irvine after completing his Master’s in education at Columbia University’s Teachers College. When he’s not doing research, he’s quite active with LGBTQ outreach both locally through mentorship and, more broadly, online. He’s the former founder and editor of a now-discontinued blog titled Below the Belt, where multi-generational academics, activists, and artists would gather to discuss issues broadly related to gender and its intersections. His four-year stint as editor ended when he started his PhD program. A relic of the site can be found here, in e-zine format.

What drew you to the field of Sociology?

“I actually didn't discover sociology until I took a couple graduate courses in education law when I lived in New York City. I had thought I wanted to study law, but when my courses included literature from the sociology of education I found a new passion! I felt that "spark" when reading sociological research, and knew then that sociology was a good fit for me. I have also come to appreciate the interdisciplinary nature of sociology, where it is not uncommon to see researchers speak to many different empirical genres (education, law, social movements, health, etc.). Yet at the end of the day their work still manages to come together to theorize about core dimensions of social behavior that shape society.”

What are your research interests?

“My research primarily centers on education, youth, technology, and social inequality, though I also study intersections of these different interests with colleagues in other research areas (social movements, partner selection).

My dissertation will focus on how new media technologies are taken up and evaluated in different educational contexts. I’m interested in how young people use new media technologies in ways that enable or deter learning and inequality more broadly. My work on digital media and learning is particularly salient here. With other graduate students and faculty from research teams around the country, I am examining the learning ecology of networked environments as part of a MacArthur Foundation-funded research initiative called Connected Learning. I work on a team that focuses on how interest-driven online contexts can support academic engagement and learning outcomes.” 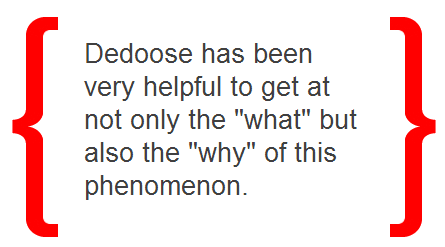 “I think Dedoose was particularly useful for a study I conducted on dating preferences among lesbians and gay men. Previous sociological research uses dating preferences as a way to examine how racial hierarchies emerge in society. There's a lot of research on intermarriage and interracial relationships, but until recently few have been able to study how race preferences might matter for racial inequality.

My co-authors Cynthia Feliciano and Belinda Robnett previously conducted quantitative analyses of thousands of dating profiles and found that heterosexuals exhibited gendered patterns in their race preferences. In particular, they discovered that heterosexual whites were least open to other racial groups. Heterosexual men were very exclusionary towards black women and heterosexual women excluded Asian men.

When I joined the project I wanted to see what the race preferences of lesbians and gay men looked like, and why they stated the preferences they did. Dedoose has been very helpful to get at not only the "what" but also the "why" of this phenomenon.

I have employed a mixed methods approach to this project. I've finished analyses for this particular paper and I'm in the process of writing up the results. I will post drafts from the current project as they become available at my website. A paper from earlier studies of heterosexuals can be found here.” 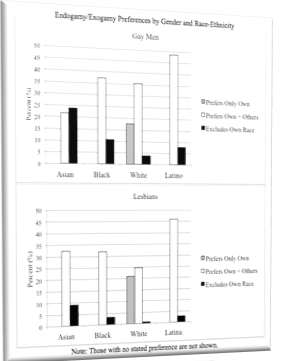 What inspired this research? “A big part of the inspiration came from the work that my co-authors conducted before I joined the project. Their idea to analyze dating profiles to examine an understudied dimension of inequality -- race and racism through intimacy -- was really novel. I have also been involved in LGBT activism over the years, and undercurrents of racism within the movement have always been prevalent. I thought examining gays' and lesbians' preferences might show a dimension of race relations and inequality that could potentially start an important conversation within the community.

The chart to the left conveys some of our findings and shows endogamy and exogamy preferences of gay men and lesbians in my sample (randomly selected daters from New York City, Los Angeles, Chicago, and Atlanta). It shows that gay men and lesbians of color are much more likely to exclude their own racial-ethnic group, and gay black and Asian men are much more likely than black or Asian lesbians to exclude their own group. These are results from the quantitative analyses. Other analyses show that whites are most preferred, particularly among gay men, and that lesbians are less racially selective than are gay men. I think the study suggests that sexual racism exists among both lesbians and gay men, but that it is particularly prevalent among gay men.”

How are you using Dedoose to meet your research needs?

My quantitative work clearly revealed the "what" -- that is, that certain patterns of race preferences existed among gays and lesbians. However, I needed to conduct qualitative analyses to unearth the "why." Dedoose's descriptor function allowed me to link the memos with quantitative variables from my earlier findings, so I could code and find patterns that clarified my quantitative results. With the help of Dedoose, I was able to determine that online daters differently describe masculinity and femininity on their profiles depending on their race preferences. In particular, Black and Asian gay men who exclude their own group prefer to date masculine men (and the descriptors showed that these daters prefer instead to date whites), and black and Asian lesbians who exclude their own group prefer feminine women (also instead preferring whites). Thus, Dedoose enabled me to contextualize my quantitative findings by showing how preferences for race are tied to racialized understandings of masculinity and femininity.”

What is your favorite Dedoose feature? “I think the best feature about Dedoose is its mixed methods capability through linking memos with descriptors. I also think that code co-occurrence is fantastic. It creates new ways of representing your coding, which is almost always generative of new ideas for your project. It is also a way to produce network data from qualitative work.”

For more information about Matt and his work…